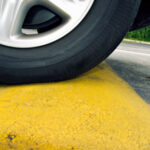 Please be advised that the Board is reviewing your concerns about the recent removal of speed bumps at their next meeting. There are a number of new warning signs being manufactured to promote safety within the property which should be installed by the end of June.

In the interim period the decision has been taken to install the speed bump by the playground.