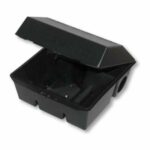 We have expanded the rodent control across the development by tripling the number of bait stations. They are strategically placed and since they are enclosed, are generally of no harm to household pets. However, the stations are designed to allow rats and mice to enter therefore it is conceivable that very small pets could attempt to retrieve the bait and consequently be poisoned. Therefore owners with small pets that may want to ensure that they are not free to venture into the common areas.